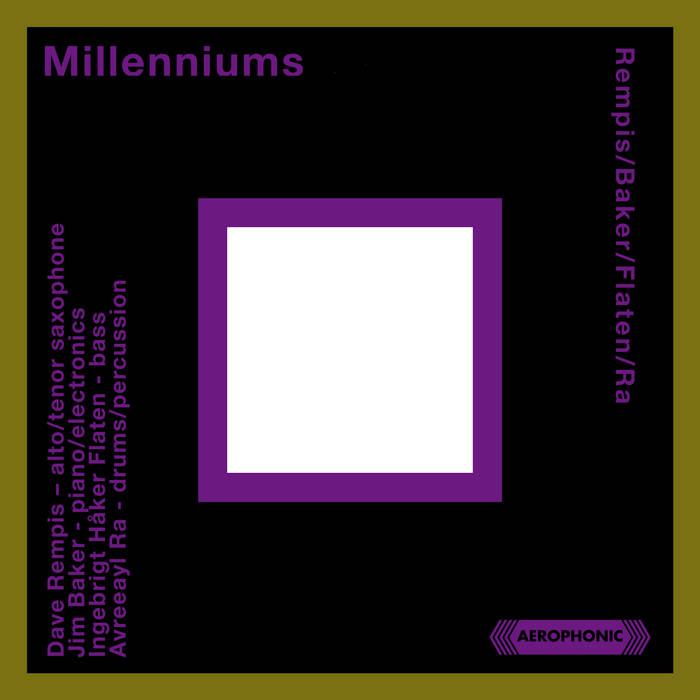 Released on Aerophonic Records (digital only) on May 27, 2020

Recorded directly off the live mixing board feed

Special thanks to Neil Tesser, The Jazz Institute of Chicago, and the City of Chicago/DCASE

This momentous live recording was made at the world-renowned Pritzker Pavilion in Millennium Park Chicago, during the 41st annual Chicago Jazz Festival on Sunday, September 1st, 2019. It was a beautiful afternoon as the quartet opened the festival mainstage that day, and as percussionist Avreeayl Ra pointed out later, it was the first time in the history of the festival that a free-improvising band had been presented on that stage. Even with all of the other challenging music presented over the years – Roscoe Mitchell, Sun Ra, Globe Unity Orchestra, Ornette Coleman, etc., no band had ever gotten up there without a script of some sort. This was truly a watershed moment in the history of this festival, this music, and its relationship to a city that has fostered its' development over many decades.

As the concert began, members of the festival programming committee stood in the wings, arms crossed, fretting over whether their gamble would pay off. To their surprise, this fiery ensemble was welcomed with warmth and enthusiasm by the crowd of roughly 8,000, marking a significant moment in the history of the music in this city, and perhaps nationally. One could sense the sigh of relief emerging from the organizers as the proverbial tomatoes remained on the lawn in their respective picnic baskets. Instead, applause and shouts of encouragement and appreciation rang out across the park for music that’s both quite abstract and quite energetic, as you’ll hear.

The lineup for that day was quite close to what’s normally a working Chicago-based band. Rempis, Baker, and Ra constitute ¾’s of that regular unit, and are normally joined by bassist Joshua Abrams as documented on three previous Aerophonic Records releases – Aphelion, Perihelion, and Apsis. Unfortunately, due to a booking snafu with the festival, Abrams was already committed to a tour with his outstanding band Natural Information Society in Europe at the time. After some deliberation, the remaining members decided it would be best to do the performance with another bass player in his stead, and since Norwegian phenom Ingebrigt Håker Flaten was in town that weekend for another performance with Rob Mazurek’s Desert Encrypts, it only made sense to draft him into the fold. Flaten has worked regularly with all of these musicians over the years, and as Ra said at the time “he and I just have a hook up.” Although Abrams’ voice was greatly missed as a crucial part of the language developed by this band over the years, Flaten did a remarkable job in his stead, providing an interesting take on the vision of what this ensemble is and does.

This recording came directly from the mixing board in Millennium Park, and although the basic sound is quite good, it’s not ideal for hard copy release since it’s not possible to mix individual instruments differently. But, it provides a special documentation of an important historical event, and goshdarnit,