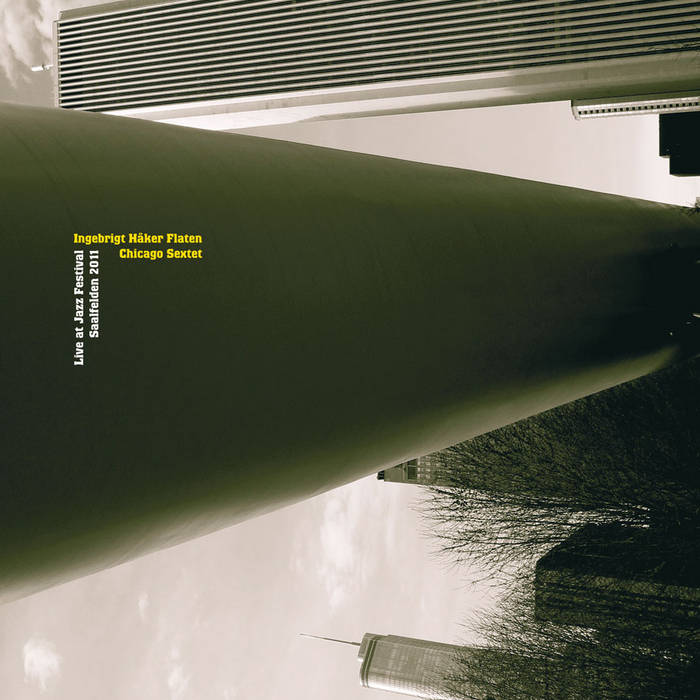 
Live at Jazz Fest Saalfelden 2011 marks the third iteration of the quintet led by the powerful Norwegian bassist and composer Ingebrigt Håker Flaten. In fact, this time out the quintet has actually become a sextet with the addition of the acclaimed vibraphonist Jason Adasiewicz. As the album title says, the music was cut live at the prestigious International Jazzfestival Saalfelden in Austria in August of 2011, a concert that marked the first-ever performance by this particular line-up. It should come as no surprise that Håker Flaten forges yet another new approach here, easing the ferocity that’s distinguished much of his playing and that often characterizes that sound of Chicago improvised music. The bassist lived in Chicago for several years, but he’s been working with its musicians for even longer. In addition to Adasiewicz, guitarist Jeff Parker, saxophonist Dave Rempis, and drummer Frank Rosaly are all key figures of the Windy City scene, while violinist Ola Kvernberg is a fellow Norwegian. His new music favors something more contemplative, yet if one really looks at his work over the long haul they’ll realize that the bassist has always demonstrated broad stylistic concerns.

“I think people had heard us in the context of Chicago free jazz—more aggressive, less melodic—but my music has always had these different elements,” says Håker Flaten, who now lives in Austin, Texas. Indeed, he’s probably known best for his long-term membership in Atomic and the Thing—two of the most important and hard-hitting working bands in European jazz and improvised music—but over the years he’s also worked with standard-bearers of Scandinavian jazz, from drummer Jon Christensen to keyboardist Bugge Wesseltoft, and his new sextet has helped him articulate a more meditative and expansive sound, one that doesn’t shy away from his Nordic roots. When the organizers of the Saalfelden festival approached him about presenting his quintet, the quintet had been inactive since the spring of 2008, when it had toured in Europe.

“It had been a long time since the quintet had played and I got the idea to bring another voice into the band and take it from there,” says the bassist. “Choosing Jason was very easy. In Texas I have a sextet called Young Mothers with a vibraphone player, so some of the music I had been working with involves the instrument. And I had always wanted to play with Jason, so it made a lot of sense.”

The original version of the quintet started in Oslo, with an all-Norwegian cast: Kvernberg, guitarist Anders Hana, reedist Klaus Ellerhausen Holm, and drummer Fredrik Rundkvist, but not long after the group released its eponymous debut for Jazzland in 2006, the bassist was living in Chicago and putting together a US-based version of the band, which eventually released Year of the Boar in 2008. When the new line-up reconvened after three years of inactivity, they encountered a mostly new repertoire, with only a couple of numbers from that last recording. The sextet worked up new arrangements in two days of rehearsals prior to the Saalfelden performance.

“The music on the new record is very different from what the band has done before, although musically we can go in all kinds of different directions,” he says. “It’s a different sound. Everyone was contributing ideas, so the result felt really natural.” Indeed, the four stunning tracks collected here reflect a bandleader aware of the strength’s possessed by his collaborators, but also of a composer who uses improvisation as delivery vessel. Time and time again, these pieces develop and progress to new sections through rigorous solos, meticulously woven into the fabric of the compositions. Håker Flaten eschews loose thematic material—he doesn’t want to present a round-robin collection of solos housed with a verse-chorus-verse form.

“Virgoan Ways,” the epic that opens the recording, offers the perfect example of how the bassist’s ideas seem to grown organically from one to the next. The piece opens with a lengthy collage of resonant long tones shapes by guitar feedback, before Håker Flaten delicately shaped line emerges from the glow, providing the musical skeleton for the tune’s first section. Kvernberg’s amplified fiddle glides in, slowly ramping up the energy level until the full-band kicks in, framing the twisting unison line with a mix of warmth and power. A baritone saxophone ostinato played Rempis then forms a tender foil for a gripping arco bass solo, which is eventually suffused by the glow of shimmering vibraphone until the saxophone abandons its polite pattern from violent snorts and screams, setting up the driving conclusion, which, following a cage-rattling solo by Rosaly, modulates the pitch and heightens the intensity of the original theme. The entire record is filled with these sorts of contrasting passages, creating ever-changing contexts for each member to improvise within. The bassist’s experience and excellence as an improviser vitally informs his abilities as a composer—his writing takes into account what his fellow musicians will have to work with. On the even more explosive closing track the band rocks as hard as any improvising unit on the planet, thriving over a bassline that sounds inspired by the classic Art Ensemble of Chicago tune, “Theme de Yoyo,” complete with a chaotic surge that rolls back into the killer groove.

Unfortunately, with band members busy in many different projects to say nothing of residing in three different cities on two different continents, the group doesn’t get to play very often, although it did give a rousing performance at the Jazz em Agosto festival in Lisbon this past August. “It’s frustrating that we can’t play more, says Håker Flaten. “It’s how logistics and the calendar work.” At least we have this new platter of fresh music to dig into.