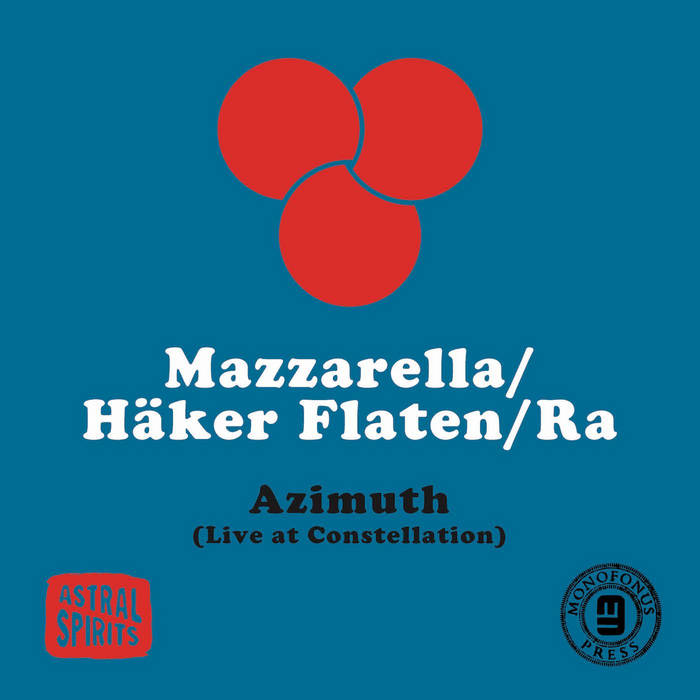 "Earlier this summer alto saxophonist Nick Mazzarella celebrated the release of his trio album Ultraviolet (International Anthem) with a performance at Constellation. The group—with bassist Anton Hatwich and drummer Frank Rosaly—has been the one that Mazzarella has played with most often during the last half-decade, and its third release is also its strongest. On Monday the trio plays a free concert at the Empty Bottle with Health & Beauty and Marrow—once again celebrating the release of the new recording (this particular evening fetes the emergence of the vinyl version of the album, so I guess the earlier show was just for the CD).

But Mazzarella has a newer trio recording that's just dropped. Last September he corralled bassist Ingebrigt Håker Flaten (a former Chicagoan now based in Austin, Texas) and drummer Avreaayl Ra together for an improvised set at Constellation, which Mazzarella recorded. The performance is now available from the increasingly impressive Austin-based cassette label Astral Spirits, and it offers a nice contrast to the concise, swing-driven approach of Mazzarella's outfit with Hatwich and Rosaly. The tape Azimuth (Live at Constellation) features three lengthy group improvisations all marked by a fiery intensity, with the front man's playing less indebted to his usual Ornette Coleman and John Coltrane influences.

Side A of the tape consists entirely of "Vega," a 30-minute jam that ebbs and flows with an organic sense of development—grooves quicken and release, as do volume and energy. Although the musicians don't work together often, they're very much locked in here, responding to one another as an ensemble that rises and falls as one. That's not to say that each player isn't afforded lots of space to make individual statements—there are plenty of extended breakout passages, including an especially effective bass-drum duet halfway through "Vega"—but ultimately what makes the work most compelling is how collective it is. Below you can check out an eight-minute excerpt from "Vega." The trio has no Chicago shows on the calendar, but here's hoping they get to celebrate a cassette release soon, let alone a digital download."

We are very excited to present a first time meeting of the incredible trio of Nick Mazzarella, Ingebrigt Haker-Flaten & Avreeayl Ra! “Azimuth (Live at Constellation)” is exactly that…their first meeting recording live at Constellation in Chicago, IL one year ago in September 2014. 60+ minutes of pure free improv that finds each member of the trio venturing outside of their comfort zones.

When Ingebrigt initially gave us the recordings of this show he made a specific point to mention that Avreeayl is on fire…and indeed Avreeayl is quite animated, stretching into many different zones (and beyond) where the Phil Cohran/Sun Ra influences are quite apparent. But this is a TRIO recording and both Haker-Flaten & Mazzarella turn in masterful performances. Haker-Flaten as always knows when to turn on the power and when to lay back into the groove, always with a masterful command that shapes and prods the improv. Nick Mazzarella may be a (slightly) lesser-known name in free jazz circles but I’m sure that will change very shortly. Mazzarella has been tearing up the Chicago scene (playing with his own trio as well as Ken Vandermark’s Audio One, Chicago Reed Quartet, and many many more) and is set to become one of the head honchos…Mazzarella’s playing on the opening 30 minute epic “Vega” goes from measured tones to almost Roscoe Mitchell-esque runs by the end and all levels in between. Most of what we’ve heard from Nick has been in more compositional settings so it’s extra exciting to hear him really stretch out around a world class free improv rhythm section.